We packed a lot into our four years in Russia. Although we continued to be CrossWorld missionaries, were working on projects under the direction of other missions. During the two years we lived in Izhevsk in the Udmurt Republic, we studied Russian and taught English classes at an institute operated by Pioneers. Next, we lived in Moscow for a year of more intense Russian study. Finally, we moved to Vishniy Volochok (between Moscow and St. Petersburg) where we developed a church-planter training center for Peter Deyneka Russian Ministries. 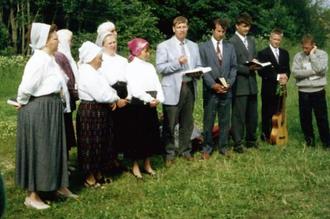 The Sallee Family and Ministry

At each location, we learned a lot about the Russian people and culture. As a result, we understood the need to adapt church planting techniques and teaching to the Russian culture. This is why we were excited to help write the Omega Course. We were able to teach it to our church planters and observe the results as we developed each section. I think that is why Omega has been so effective and why it is continuing to be used in so many countries.